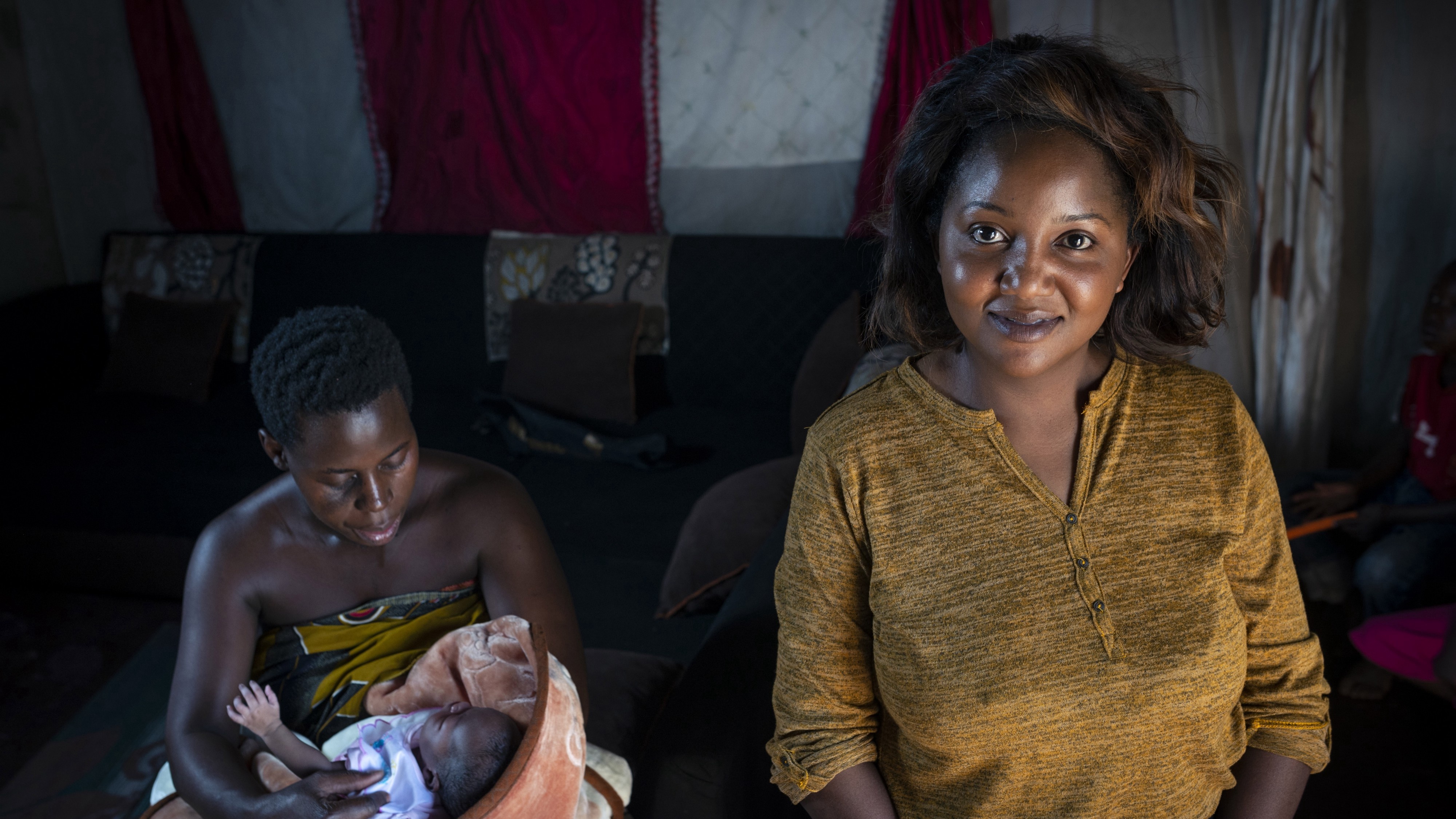 Muzalema Mwanza, co-founder of Safe Motherhood Alliance, with a mother aided by her organisation

Four years ago, I was pregnant with my first child. I discovered that the public hospitals in Zambia required pregnant women to bring their own birth materials — scalpels, towels, even cotton wool. I was shocked — not only was it so difficult to find those items when I went looking, they were also so expensive. If a woman doesn’t have these materials she’s asked to go back and find them, or even turned away — but if she’s in labour, she really can’t wait. And the more I dug, the more I realised the challenges that other women and mothers faced with traditional birth attendants (TBAs), as 63 percent of all births in Zambia happen outside of a health facility. Zambia has more than 1.5 million births each year. This is a crisis.

I thought, “What can I do?” I’m a civil engineer. I was working in the rural areas, and I couldn’t imagine having to travel all the way to the city just to give birth. So I established Safe Motherhood Alliance, a social enterprise that advances safe births for pregnant women in low-income communities and rural areas. We’ve put together what we call a baby delivery kit, of all the items a woman requires during childbirth — whether it’s a facility birth or a home birth — and we also train TBAs, who are also our distribution agents.

I took the list from a hospital, and figured out what we could include in the kit — a scalpel blade, delivery mat, umbilical cord clamps, sanitary pads, cotton wool, and sterile gloves. The items on their own cost anywhere between $30 to $50 — which is very expensive for our target population — so we leverage buying in bulk, we leverage manufacturing some of the items ourselves, and we’re able to reduce the cost significantly. Currently, they’re $5–10, and we’re looking to get that below $2.

In the communities that we serve, the families are earning less than a dollar a day. Most of the women are involved in informal labour. 90 percent of them live in unplanned settlements. We mainly work in the huge compounds and slums in Zambia. The biggest one that we have here has about 500,000 people, with very high mortality rates, in Lusaka. Before we started, I thought our work would mainly be in rural areas, but I realised that even in the capital city we have a high number of home births because they lack access to the materials.

Zambia also doesn’t have a big manufacturing base — 99 percent of the materials in the kit are imported. We have to pay extra for something as simple as sanitary pads (and they’re taxed, too). That’s why we’re also working on manufacturing some of these items ourselves, using local materials. Even at $10, it’s a very high price for most of the women we work with, so we want to manufacture at least 80 percent of the items ourselves — and we’re currently doing that with support from FCDO, the Frontier Technologies Hub and the COVIDaction team. They purchased sanitary pad machinery for us (the first in Zambia!), and we’re training the locals how to use it. But that’s still just one item in the kit, and when you look at the list of items that are required to bring with you to a hospital, you don’t find them all in one shop — I myself had to make eight stops when I tried to find them. And some are very regulated, like the disinfectant has to be hospital grade, bought from a specific dealer and manufacturer.

When the pandemic hit, too, we really had to pivot how we worked and scaled up our model to focus on home births, as women couldn’t go to clinics. We’re working with the Ministry of Health to give women the right information — there were a lot of dangerous stories going around about how to prevent COVID-19 by drinking disinfectant or steaming yourself. Fortunately for us, because our programs started before COVID-19 hit, we could follow up with women that already had registered with us and get them the right information as well as the kits.

Of course, something that affected us a lot were global supply chains — we just could not get anything on time. Everything was being sent to the West, and Africa was not the centre of attention. Like the global shortage of face masks — we just could not get any from anywhere. Fortunately, my engineering background kicked in, and we pivoted again. We had a 3D printer, so we started making masks, to make sure that our TBAs were safe with home visits. We’re working with FCDO to ask, “What else can we 3D print, so we’re not having to import it?” The next one down the line is umbilical cord clamps, and we’re very excited about some of the stuff that we’re working on. We need to manufacture what we can locally, as much as possible, so we’re prepared adequately for the next pandemic.

We also work with the TBAs. These are community midwives — women who assist women to give birth, as a service, because they don’t have a choice. It’s 1:00 AM, she’s going into labour, there’s no ambulance service, there’s no hospital within a hundred kilometres — what does she do? They have experience, just from being mothers themselves, or from assisting women in their communities, but they lack training and they lack the right tools. She’ll go in a home to assist with a birth, and she doesn’t have anything to use. They look for the sharpest tool in the kitchen, or any cloth material to swaddle the baby. They’ll not use gloves or any kind of protection, and a couple of weeks later, the woman has sepsis, or the child has tetanus. That’s why we package our kits to be convenient — so they can be used in an emergency at home, or they can be used for facility births so that a woman isn’t chased away from a hospital. The TBAs also earn a commission of one percent for every kit they sell, so we’re also giving them an additional income.

“We’ve seen that, when there’s a kit in the room, the whole conversation changes.”

One TBA we were working with, who had helped several women give birth, didn’t realise the dangers that she had put herself and the mothers in — because she would assist births without any gloves, just looking for materials to use in the house. But through training, we were able to certify her as a skilled birth attendant. Now, she practices her craft in the clinics, side-by-side with a skilled nurse and midwife. It’s bridging the gap between the traditional and the Western worlds of medicine. We try to be culturally sensitive with our programs, as much as possible — for the communities that we serve, it’s very important to them.

We’ve seen that, when there’s a kit in the room, the whole conversation changes. The midwife or nurse is no longer worried. Her concentration turns instead to the pregnant woman: “How do I help you? What do you need?” And the men are more involved in their wives’ pregnancy journeys — you see them on their bicycles, rushing off to look for these kits. It’s an amazing thing to see.

FCDO is also funding the technical advisory services for the app that we’re developing to help us track women once we register them, to send them push notifications for early vaccinations, and to just do follow-ups with them. We quickly learned that people drop out very early. You get 90 percent turnout rates in the first days of antenatal services, but nine months later it’s only five percent — it happened to me when I was pregnant. I was like, “Where have they gone?” We need follow-ups: Have they given birth? Have they not? Was it a successful birth? If not, what can she learn to help her in the next pregnancy? And I know one way to scale up much quicker is being able to transfer information and knowledge across borders, too.

When this whole idea started, it was just something that I was asking my friends — what if I had my own material that I packed? What then would happen? I gave it to a friend of mine, she gave it to another woman, and now, last year, we did more than 20,000 kits, working with more than 50 TBAs in ten health facilities. At first, we had this ambitious plan to be in 50 clinics in a year, but Lusaka has 1,700 births per day — so that’s what we always think about now. How do we meet the number? And then, how do we scale up into other communities? I’m very excited about the future, scaling beyond Zambia. Zambia is landlocked — or, as I like to say, “land-linked”. We’ve got eight neighbors with similar conditions to what we have. Our goal is to serve at least one million women over the next four years — and we’re steadily getting there.

“Women in Africa should not be scared to give birth.”

The thing I’ve learned (and I know it’s a cliche) is the power of human connectivity. It was a very lonely journey for me in the beginning, until FCDO, the Frontier Technologies Hub and COVIDaction teams took a punt on me. It was normal — everyone was like, “Come on, just go to a store. You’ve got the money, why are you so troubled?” But I was troubled at the 80 percent of women who didn’t have the money. So I’m excited that organisations like FCDO work with social enterprises like myself to help us design the future, and to make sure that problems like this just don’t exist in the next few years. Because they shouldn’t exist! Women in Africa should not be scared to give birth. I had my own thing going on. I had my own civil engineering practise, I was doing my own jobs. But then this came alone, and it’s never stopped. The light’s never gone off. I quit everything I was doing and threw myself into this, and it’s been very rewarding.

We use necessary cookies to make our site work. Necessary cookies enable core functionality such as security, network management, and accessibility. You may disable these by changing your browser settings, but this may affect how the website functions.

We'd also like to set optional analytics cookies to help us improve the website. This set of cookies allows us to track how people use our website. Understanding that better will help us to improve it. This is done in a way that does not directly identify anyone. We won't set analytics cookies unless you accept them. You must accept or decline analytics cookies to continue to our website. If you click ‘accept’ this will set a cookie on your device to remember your preferences.